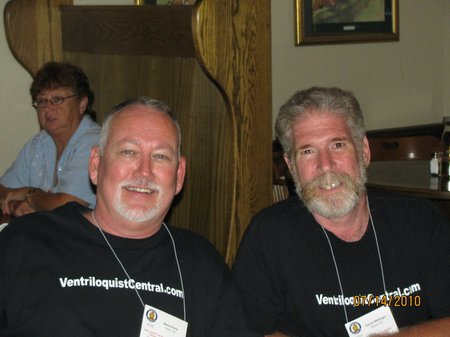 Steve and I are always discussing aspects of ventriloquism and what makes it really nice is that Steve is a ventriloquist and I am a collector. That makes for some very in depth and heated discussions. Well this particular evening was no exception for the two of us as we headed down the road of why the popularity of soft figures today over hard figures.

We of course both agreed that the ease of travel today with a soft figure has made them much more advantageous to the performer. Heck you stuff the puppet into your carry on bag and travel to any destination with no worries about loss or damage to your figure and he is with you all the time. The hard figure of course must be packed and put in with the baggage and then you just don’t know.

My friend Mike Robinson, who works Holland America lines was booked to do a month in the Orient , Australia and New Zealand. He shipped everything including his figure but the figure never arrived to the ship. He had to improvise and do stand up and magic and when he finally made it home, Nova Scotia Canada, his figure arrived home having never gone over seas.

So that is the big plus for the soft figures. I though, am a collector and to me a ventriloquist uses a hard figure. Now I know what you are thinking, Jeff Dunham, Terry Fator, Jay Johnson all use soft figures but their main figures are hard figures. As Steve and I were talking we both agreed that one of the reasons that hard figures may have also fallen off a bit was because of realism. To me if a figure looks like a real person then it really is kind of creepy. Steve actually agreed with me on this point. He also said his favorite kind of figure is a true Cheeky Boy with over emphasized cheeks. Like that which you see on Paul Winchell’s Tessie character.

I like any figure that is a caricature of a person or even that which looks like it came from a comic book. The character if not real , and then when brought to life, just makes all the difference. When I said that to Steve he agreed with me whole heartedly and actually said that when he was learning figure making from Ray Guyll, that was what Ray always preached. The figure must be a character.

Well just some ventriloquial thoughts from your hosts at Ventriloquist Central.