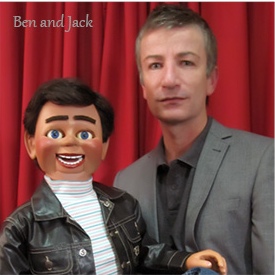 Ben Veenkamp from “down under” sent in his thoughts about his Chuck Jackson ventriloquist figure:

I wanted to send you a short email for your blog.

My Jackson figure’s face has clearly been designed so that his expression seems to change just by angling his head in different directions (and that’s before using many of the well crafted animations). The Japanese used this technique in there opera masks known as “Noh”. The masks are designed so that slight adjustments in the position of the head can express a number of emotions such as fear or sadness due to the variance in lighting and the angle shown towards the audience. Jackson figures do indeed incorporate this same technique. Add to this the perfect pitch point of the mouth, the positioning of the head stick controls and the smoothness of the animations.

But it’s not just the face and head. The body is well formed to appear like a body (formed chest, waist, hips and tummy) with the neck hole slightly in-front (rather than on top) of the body. This allows the head to pivot at more extreme angles than if it were placed simply at the top of the body, thus allowing much more expressive actions. The base of the body on which he sits is even slightly angled which allows the body to “pivot” backward and forward. Add all this together and you have a vent figure with many and varied animation styles other than just the head. Today’s modern (and rather expensive) figures do have a lot of effort added to the appearance of the face, something to the point of being almost doll like, but the bodies are always as though they are a last minute addition.