Last month Bill Matthews visited the Ventriloquist Central Collection. He was nice enough to send this email along with pictures:

I just wanted to take a couple minutes to say, “Thank You” again for allowing me to stop by and view the collection again. It was a refreshing stop on my return trip home from ME and NH. “Larry” and I were quite busy there and stopping by was a welcomed “rest stop.” I thoroughly enjoyed seeing your new additions, as well as seeing some “old friends.” I really enjoyed our conversations. It was a great blessing to me. Hopefully the next time I stop by, my son and vent student, Stephen, will be with me. He really enjoyed stopping by the last time and was greatly disappointed he didn’t make this trip with me. Thank you, by the way, for speaking with him on the phone when he called. He wasn’t expecting that and got a real thrill out of it.

Speaking of Stephen, you asked me to share the story of how he got “Cody” and send you the pictures I showed you. So here goes. He’s been watching me perform all his life (10 years) and decided he wanted to follow in my foot-steps. I worked with him a bit and when I saw he was serious, I enrolled him in the Maher Course from Clinton Detweiler. I took it in my late teens and thought it would be great for him to take it, as well. (We have a spot on the wall next to mine to display his diploma when he completes the course.) So he could practice manipulation properly, I modified a “Willie Talk” doll with the head on a head-stick and hollow body, which he named “Buddy.” He was doing quite well with that. I mentioned to Clinton I’d like to get him a more professional figure sometime, but being a missionary, funds were quite low. Clinton decided to take matters into his own
hands and put out an “APB” for a figure to be donated to Stephen. We were both surprised by the number of responses he got. We finally decided on a figure donated by Roger Riggs (If you’re reading this Roger, Thank You so much, again). What was funny at one point was as I was looking at “Cody” on the computer when Clinton sent me a photo of him, I wasn’t aware Stephen was looking over my shoulder. I said he was a cute figure and Stephen said he’d like to have one like him someday. THAT was funny.

Well, “Cody” arrived about a week and a half later and we were trying to figure out how to give it to him. I told him Clinton wanted a “better” picture of him with his figure (Clinton meant Cody, Stephen thought Buddy) and I had him put his school clothes on. I set “Cody” on “Larry’s ” stand and blind-folded Stephen. I told him I changed his figure (yeah, changed him out, completely) and wanted his first impression. I brought him to the stand, stood back with camera in hand, and told him to take the blind-fold off. His first look was at the clothes. He just figured I put new clothes on “Buddy.” Then he saw the sign I put on “Cody’s” lap that said, “Hi Stephen. I’m you’re new partner!” Then he looked up and realized it was a whole new figure! Boy, did he let out a Whoop! To say he was excited would be an under-statement.

He’s been practicing along and someday I hope to be able to submit a video of him for the archives. We’re both looking forward to our first “ventriloquial duet” in the meantime.

Again, thank you for all you do for the art of ventriloquism. The WS Berger award you received is well deserved.

PS, here are the pictures you wanted, too. 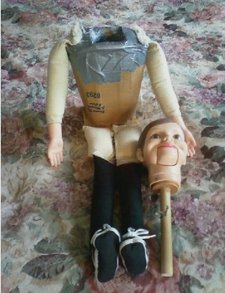 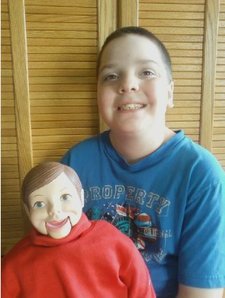 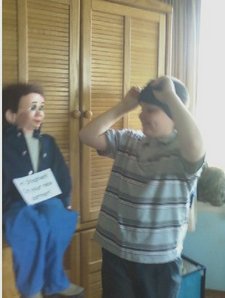 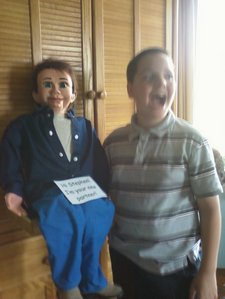 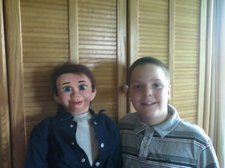 Thanks Bill for sharing.