Austin Phillips Trip to the UK 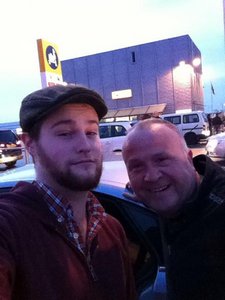 Last month Austin Phillips made a trip over to the UK. He sent us this information about his trip along with pictures.

Here is a little write up with some photos of my trip to the UK visiting my good pal Lee Roberts:

I met Lee through Ebay, Dan and myself had purchased a couple distressed Insull heads off of him a while back. In the process of restoring mine,which had been a dream of mine since I was a kid, Lee had contacted me happy to see the head I bought getting the attention it deserved.

We got to talking and became fast friends. Lee told me that the heads belonged to his father, Johnny Roberts. We talked back and fourth sharing stories, and here is only some of the brief history about his dad. Johnny Roberts was a life long working club ventriloquist in the UK for over 40 years, and his partner was a Insull 7 movement doll by the name Tommy Trouble.

Together, they toured all through Europe performing their act at pretty much any club you could name. Johnny Roberts topped the Bill in the night club world, he was even awarded being the BEST TECHNICAL ventriloquist in England at that time. Johnny, along with Lee, were and are Punch and Judy Men also. Fun fact, Lee is the oldest living generation of Punch performers, with his Uncle being Sid Owen, Punch has been in the families’ blood for generations. Although Johnny did perform Punch shows, his heart was more into ventriloquism.

Johnny, like myself, was obsessed with Len Insull and his work. Johnny used to visit Len frequently and learn how to repair and maintain the figures directly from Len. This was around 1957/58 when Len’s son had just recently passed away. To Johnny, Len was a genius and he had so much respect for the man. Len took to Johnny almost like son.

When Len passed in 1974, it was devastating to the ventriloquist world, and Johnny especially. Shortly after Len’s passing, with nobody to fix his Insull dolls anymore, Johnny began repairing and refurbishing Insull heads for vents all over England and Europe. Did work for Terri Rogers and Neville king, to name a couple.

Whether it be a new paint job, a quick repair or a total restoration, Johnny had so much appreciation for these dolls that he would usually do the work for free. He would spend hours and hours getting the leather just right on the jaw, or lining up the eyes just right. If it wasn’t up to his standards, he would rip it apart and start all over again.

Lee told me his father would come back from doing a show early in the morning, and head straight for the shed to work on Insull heads. Over a span close to 30 years, Johnny Roberts had redone over 40 Insull heads, ranging from 7,5 and 3 movement heads, quite a feat being a full time vent performer and a father of two.

Johnny’s last performance was in 2001 doing a show for retired doctors and paramedics. He suffered a massive heart attack on stage middle of the act. When he fell down on stage, he somehow managed to fall in such a way that Tommy, his Insull figure, landed without a scratch on him. Unfortunately, nobody was able to save him. It wasn’t until I spoke to Lee that Tommy had been out of his case since that day in 2001.

Johnny Roberts was an amazing man who had such a love and appreciation for this art that he devoted all of his time and energy making people laugh, and getting Insull figures out there in the hands of performers. He was Englands most famous, unknown ventriloquist.

When I was talking with Lee, there was nothing he wanted more than to get his dad’s name out there in the vent world. I told him I would do just that. I flew out to the UK where I met Lee, one of the nicest guys I’ve ever met, brought my camera with me and stayed for 4 days. I took a bunch of footage including interviews with Lee talking in great lengths about his dad. Meeting Lee has given me such a new appreciation for these Insull figures which I had previously already adored, and also so much respect for his dad and his family. Stay tuned for the full length documentary

I filmed about Johnny Roberts, and my journey to the UK and getting the chance to restore my Insull figure. The video will include loads of photos, untold stories about Johnny, stories about the families connection with Len and Gertie, video footage of Johnny’s act and more! This will be premiering on Ventriloquist Central, free to view, within a few months. Also available in hard copy at Vent Haven 2014.

Here are some photos of the trip, Myself, Lee, the ventriloquist figures/punch puppets, and some shots of Johnny. Thanks again to Lee Roberts for all of the information, and housing and feeding me for 4 days! You duh man!

Thanks for sharing with us Austin, looking forward to seeing the video.

3 Responses to Austin Phillips Trip to the UK