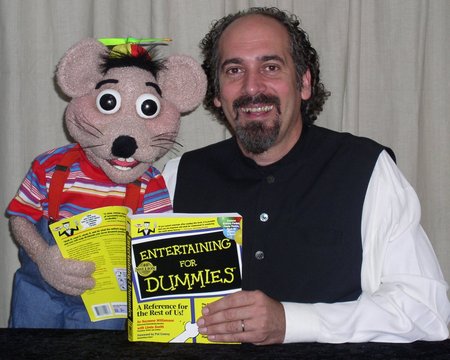 Last week’s advice blog stirred up some conversations. One particular was about the imitation of other vents. That made me want to write about a topic that is taboo and usually avoided – stealing material. (*gasp*)

Before I start, let me say that any opinions expressed in this blog, are strictly mine and not those of Ventriloquist Central, Venthaven Convention and should not be rebroadcast or retransmitted without the express written consent of Major League Baseball.

Now let’s talk about the pink elephant in the room: stealing material. (* another gasp*) I am not talking about buying dialogue books that are sold for the purpose of using them on stage. I am talking about hearing a funny joke or jokes from another vent and using it in your own act.

Let me confess here, I have used others people’s jokes. There I said it, I can now sleep better tonight and my conscience is cleared. Now it’s your turn…

Ok, so now we all agree, we have all done it at least once in our shows. Let’s face it, most comedy is recycled to some extent. The “I Love Lucy” show was not all original, some of the bits were taken from vaudeville and stage acts.

I remember Jay Johnson told a very funny joke that I just loved. I told myself I would not use the joke because it was Jay’s to tell and I did not want to take something that didn’t belong to me so I refrained myself from telling this very funny joke for months. Then I opened up an old joke book and guess what was in it? The joke that Jay told! Now it was free for me to use.

Jokes in those joke books like “1001 Funniest Jokes” – or any Milton Berle Joke books– are pretty much in public domain and can be used freely by all comedians and vents. I now use the joke I heard from Jay. If I hear another vent use it, can I get upset? NO. I have to realize just because it is a staple in my routine, it’s not mine to keep. One of the differences is that I rewrote the joke to fit my persona, this makes it more of my own joke.

There are some jokes that are so funny they deserve to be shared. However, there are definite limits. Jokes are creations just like any other creation. When you hear someone using something that you spent time creating, it is not a good feeling. It sometimes takes days, weeks or even months to come up with that perfect joke. Jokes can be hard to write and it takes a lot of effort. If someone just snatches it up, it is stealing. Plain and Simple. For us who perform full time and depend on daily work take this very seriously. Our livelihood is paid by the jokes we tell.

The late Johnny Main was a great ventriloquist, and also my friend and mentor. While visiting him at his home in New York, he told me that if I wanted to continue being his friend I better not do any of his routines EVER. I promised him and that was the only time he ever mentioned it. I have been saying for years: “Association is vital for growth.” With that in mind, you never want to have a reputation of stealing other people’s material because you will lose friendships that way.

Some people are willing to share material with other performers. But sometimes that can backfire. Another mentor of mine, Bill Boley was always open with sharing his material. Once on a stage show, a ventriloquist was performing right before Bill. This ventriloquist did Bill’s routine word for word. When it was time for Bill to perform, he came on stage white as a ghost because the first performer did the act that Bill was planning on doing. That was one of the only times I ever saw Bill really upset. If you have permission to use another entertainer’s material, use it wisely and especially not on the same bill.

Some years ago at the ventriloquist convention, Three performers all did the same routine and song. When it was time for the third performer to sing, we all gasped and someone in the audience yelled out, “No, don’t sing the same song!” You think the third performer would have just given up. They did the song anyway and lost the audience immediately and eventually all three performers were labeled uncreative and lame.

At one of the Vegas Ventriloquist conventions, a well known performer was scheduled to perform. People were looking forward to seeing his act. But he walked on stage and for the whole time he did balloon animals — all balloon animals. We were confused and wondered why this pro would waste everyone’s time doing balloon animals. Later on I found out before going on stage he looked out at the audience and saw people with notepads and tape recorders. His first thought was, “I am not going to give my hard earned material away for others to steal.”

Stealing is a concern of many professional vents. Some people who steal material do it innocently and don’t think anything of it. But that doesn’t mean it’s not stealing. There are too many ways to write your own material. Giving in to stealing material will make a performer stuck in a rut and eventually become unentertaining.

Here’s some of my opinions on stealing material:

· While using other people’s material is cute for newbies, it should be avoided the more professional you become

· If you hear a joke from another vent you want to use, ask them if they wrote it. If they did, don’t use it unless they give you permission to.

· If they found it in a joke book, it’s yours for the taking.

· There are common jokes that everybody uses, so keep telling them. They have no origin, they are nobody’s personal possession.

· Every comedy vent should have the Milton Berle Joke Books volume 1 & 2 in their library.

· If you become known for stealing other people’s material, you will find yourself alone in this business

If you’ve been “borrowing” material and you want to start writing your own:

· Writing a routine is not easy, but it can be done and done well. Don’t talk yourself out of writing.

· Take criticism and don’t be insulted. If your comedy friends say something is not funny, take it out or rewrite it.

· Surround yourself with funny.

Remember, these are only my opinions. Whether you are new to ventriloquism, semi-pro or working full time as a vent, we all want to succeed.

Be original, Be creative, Be YOU