Posted on September 3, 2009 by Webmaster 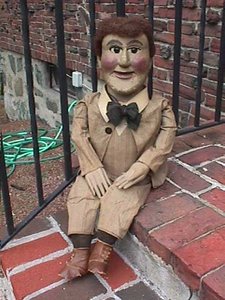 It is so great when you get pleasantly surprised and this was one of those times. I purchased an antique ventriloquist figure which I originally thought was an English figure because of his look and the fact that he had the English style leather mouth. (Living mouth as it is called today was coined by Craig Lovik)

Upon his arrival as I unpacked him I got very excited because instead of being made from paper mache he was all carved wood with original carved wood hands and great wooden body. He stands 30″ tall and his head is unusually large for the size body. He is dressed in his original Edwardian attire.

I had to do some digging in all my books and on the Internet but I do believe that I have found this figure was carved by Louis Grannat of Brooklyn N.Y and was done in the late 19th to the turn of the 20th century. This makes him an actual antique. True definition of antique is 100 years old except for automobiles which is 25 years old.

I know of only 2 other Louis Grannat figures and both of them are in the Vent Haven Musuem. The first is called Tommy Baloney and was the very first figure purchased by W.S. Burger and it was one of his favorite four figures. (click here to see Tommy Baloney)

The second in the Vent Haven and is called Wynnychuck Boy. Unfortunately if you do not know of this figure you will not be able to see him as I do not think he is visible on the Vent Haven site. He looks very similar to the figure You see here in the Ventriloquist Central Collection. The Tommy Baloney figure is a different face.

So I hope you enjoy looking at this wonderful addition to the collection.