A Frank Marshall Ventriloquist Figure Made for Nate Proval 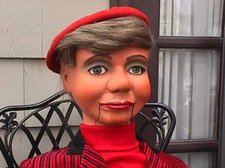 It has been quite a while since I have shown a Frank Marshall figure to the Ventriloquist Central public so today I am rectifying that by premiering this superb example.

This Frank Marshall creation was made back in the early 1930’s for a Ventriloquist named Nate Proval and he went by the name of the Golden Bird. You see his speciality was whistling and since he was also a ventriloquist his figure had to have this feature.

This figure has a good history as it went from Nate Proval to a ventriloquist in Hawaii. Unfortunately I never was able to get that owners name but from that owner it went to puppeteer and ventriloquist Steve Meltzer and literally just before my friend Steve passed away he wanted his Marshall figure to join the Ventriloquist Central Collection.

So here he now resides. When he came to me he was in need of a bit of work. The upper and lower lips were torn (leather) and some of the controls were not working properly. All of that has been fixed and he now is a great looking fellow.

This figure stands 40″ tall and has the head stick which goes to the bottom board. His head has 360 degree rotation. You can actually spin his head on his axsis . He has side moving self centering eyes, the left eye winks, both eyes blink (both of these functions are the rolling eye style), he has slot jaw and whistling effect.

There is also a tube which was installed into the lower palate, I presume for a spitter, but was never completed. I showed a picture of this. This was a very loaded figure for this early in Frank Marshall’s career. Also all of the functions were done with ring pull. There are no levers and never were. Proof that ventriloquists did use this style of function.

If you have any information on Nate Proval please let us know.