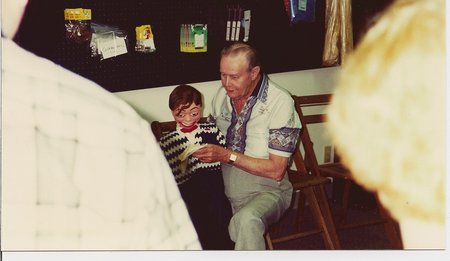 Dan Christopher of Florida Magic and Sound, sent in this little story and photo of Walter Walters Jr:

Nice to see Walter Walters, Jr’s marshall figures again. Sometime in the middle 1990’s we had a little vent get together at the magic shop I had at the time. I remember Bob Ladd was in town and old timers Walter Walters, Jr and Danny Asbury were there along with Tom Ladshaw, Mark Merchant, a few others, and myself, of course. Walter took over the thing unpacking his figures and setting up the stand and describing his act with stories of his USO shows. We were all impressed with the way both figures, the stand and a few novelties all fit into one case (I learned a lot about trouping that day – I still, to this day design my acts to pack like Walter’s)He said at one time he had 3 sets of figures (don’t know what happened to the others..) and that Frank Marshall made them all as well as making all of his parents figures. Attached is a pic from that day – looks like Woody is sneezing..

I remember talking to Walter on the phone a few months later (I can still remember his thick Philadelphia(actually he was from Atlantic City) accent, “Hello Dan, this is Wualter Wualter juunuer….”)and he told me that he had sold both figures to Alan Ende. Walter was later a little upset as Alan had decided to sell the figures individually – breaking up the set.. Glad to see that they are together with the stand.

I found another pic from that day showing some other vents that stopped by. In the attached pic, from L-R is my arm and nose… then Harold Greenbaum, Walter Walters, Jr, Stanley Burns (another great character, full of stories..) and Jerry Layne who was in town for some condo gigs. As I said, Walter really took the thing over with lots of stories and showing how his act set up. 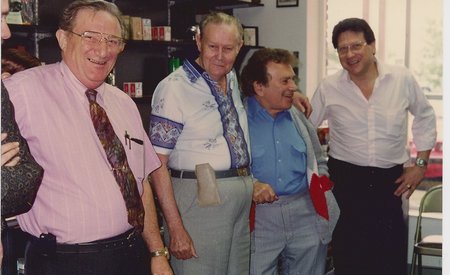 Keep up the good work!

Dan thanks so much for sharing this with us at Ventriloquist Central.