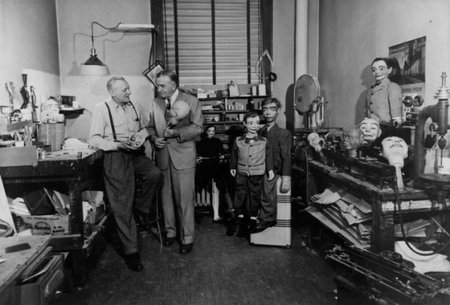 With the Vent Haven ConVENTion right around the corner, I was reminded of this blog I wrote a couple of years ago and thought I would share it with everyone again.

We all know how good a figure maker Frank Marshall was and we all know he did many repairs on figures but I had no idea how accomplished he really was until I read the following except as a news flash from W.S Berger in the 1953 January issue of the Oracle Magazine. I have it here for you all to enjoy!!

Flashes From The Vent Haven
By W.S. Berger

FLASH-My visit to Frank Marshall’s shop for one week was very colorful. For a little relaxation from the daily grind at the Vent Haven, decided to go to Chicago, primarily to devote some time with my warm friend F r a n k Marshall, to secure names for the Directory of Ventriloquists and to have an intricate repair job made on a McElroy figure.

Frank turned his files over to me, and a number of new names were found for the Directory. As to the cranial operation on the figure, it looked like a jig saw puzzle, since several controls were disconnected from the intricate mechanism, but Frank finally wound up with a complete and most satisfactory job.

Dr. Joseph Sonntag and his charming wife invited us to their home for dinner, which we enjoyed immensely . . . even a baked apple was served. Mrs. Sonntag is a very good cook and is in competition with Muzz.

After dinner we were entertained with a series of colored slides of vents and others, which were projected on a screen. We were also amazed at the fabulous collection of playing cards, which they have collected over a period of years. Anyone having playing cards, should contact the doctor at 215 E. Chestnut Street, Chicago.

It was a thrill to meet many of the vents that came in unexpectedly, at Frank’s shop. Here they are, Stew Gilliam, Jay Jaxon (he came in twice from Plano, Ill.) Great Chesterfield, Herman Winters, Milt Rowland, Paul Stadelman, Les Lester and wife, Lester Marshall, Jr., Lynn Drew, of
Evanston, Ill., who signed up in the IBV.

Talked over the phone with Stanley Burns from Pittsburg, and George Marks, of Detroit. Both were after their jobs that Frank had in process.

Finally, Frank rearranged his shop for a professional photographer to take some shots to be used in his new catalog, that is in process, and of course Frank insisted that I be in this photograph. I enjoyed being office boy and typist for the duration of my stay, and hope to repeat the procedure again. I was surprised at all the details that are associated with this vent figure making business.