Ventriloquist Edgar Bergen – He Was A Brilliant Marketer

Many people have differing views about Edgar Bergen and his ventriloquism techniques. But none can argue with his marketing abilities.

Back in 1949 this picture and article appeared in publication to promote the Edgar Bergen, Charlie McCarthy radio series. I thought you might enjoy seeing it. 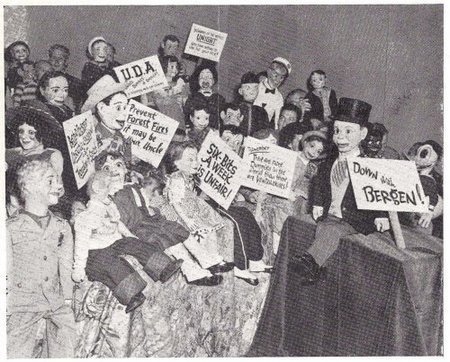 Charlie McCarthy organized his wooden-headed friends into the “United Dummies of America” at a recent dinner meeting in Hollywood, for the purpose of demanding “a decent amount of security throughout our lives, from the forest to the fireplace.”

Fed up with his skimpy 75-cent-a-week allowance from Edgar Bergen, McCarthy rallied his brothers-under-the-bark with the battle cry, “Dummies of the world, unite-you have nothing to lose but your voice.”

“Ventriloquists,” he added, “are a dime a dozen-but only God can make a tree! “

Bergen was finally permitted to reply to Charlie’s ringing speech, although a number of the dummies including Charlie-yelled, “throw him out.”

“Friends,” Bergen began, “money isn’t everything.” His words were lost in a chorus of boos from the assembled dummies.

Finally, Bergen broke down and offered–on behalf of the ventriloquists a revision of their basic wage scale. Instead of the prevalent six-bits a week, Bergen offered $3 a month.

Tumultuous cheers went up from the dummies. Swiftly they voted a resolution approving the offer.

It was only after Bergen had left that Charlie got his multiplication table to working sufficiently to discover that they had been gypped and the meeting broke up in an uproar.

The unique conclave of dummies was, of course, designed as a publicity springboard for the opening of the new Edgar Bergen-Charlie McCarthy radio series for The Coca-Cola Company. The press turned out in strong fashion, outnumbering the ventriloquists and dummies.

3 Responses to Ventriloquist Edgar Bergen – He Was A Brilliant Marketer