Valentine Vox’s “I Can See Your Lips Moving” – Revised 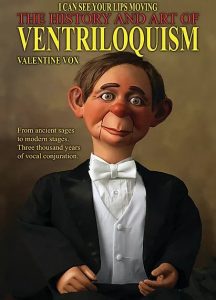 Valentine Vox posted this message on Facebook yesterday and we thought we would share it with you in case you didn’t see.  It’s about his book “I Can See Your Lips Moving – The History and Art of Ventriloquism”.  He has revised it.

As I have had an overwhelming amount of you linking up with me as ‘friend’ I apologize for not being able to answer each one individually. So, instead thought I would greet you collectively and bring you up to date.

Now in my eighties, for the past seven years I have been on a sabbatical engrossed in writing a revised edition of I Can See Your Lips Moving, the history and art of ventriloquism.

Why you may ask.? Answer: Since the book was last published in 1993 the art has made a seismic shift and between the 20th and 21st moving from a support act position into the star level on the world stage with international ventriloquists like Jeff Dunham, Nina Conte, Sascha Grammel and Cecelia Zillah Ustav to name but a few.

Also helping this new elevated stance has been Tony winner Jay Johnson with his Broadway show ‘The Two and Only” and Vegas stars like Mallory Lewis, Ronn Lucas and Terry Fator. The international television show “Got Talent’ series has also contributed to this new wave with winners like Paul Zerdin and Darci Lynn Farmer. A whole new chapter is devoted to this acceleration of the art and its many new stars mentioned here.

Also ‘the fake news’ put out by the media that ‘ventriloquism is a dying art’ for the last half century is finally untraveled, dissected and refuted in the last chapter “The Dying Art”.

Other interesting facts for trivial hunters and vent nerds: The history of the ‘talking mask’ and the legal battles which ensued to protect this feature: How about the ventriloquist who did another ventriloquist act word for word but wasn’t sued: – How many ventriloquists appeared on the Ed Sullivan show? – 50? A hundred? 200 hundred? Their names are listed in this work and the answer will surprise you and no doubt send many of you into a fact finding frenzy to challenge to this, LOL .

This new book I Can See Your Lips Moving, the history and art of ventriloquism.is now in its third printing with versions in German and Japanese- In the works for later this year is a Spanish and French edition. The book is up for review in the New Yorker, New York Times, New York Star and The Toronto Globe & Mail.

There is also a documentary in the works.

There are over 125 new illustrations it this new paper back edition which is now 256 pages. Its quite heavy weighting 2lbs and 3 oz. (0.58967 kl) which unfortunately makes it expensive to mail outside the USA.(Buy it on Amazon for better deals on postage) However good news for those in the USA is that it will be sent out by media mail which is under four dollars.

Here is the address to purchase the book: https://www.valentinevox.com/new-book

Here is the address for my web site: https://www.valentinevox.com

Here is my listing on Wikipedia: https://en.wikipedia.org/wiki/Valentine_Vox

Thank you all and the very best for the New Year

I’m sure you will want this book in your collection.

This entry was posted in Ventriloquism/Ventriloquist. Bookmark the permalink.