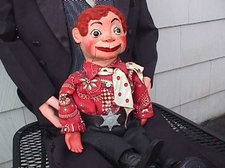 It seems that most of the makers of Figures back in the so called Golden Age of ventriloquism created different size figures but only a couple made figures that were true fully functioning figures just like the full size figures.

Of course Marshall created the Tommy Knots figure which stands 18″ tall and Madeline Maher sold a figure which the catalogue labeled as Tiny and that figure too was 20″ tall. Tiny though was a converted toy which had standard ventriloquist controls ala the head stick instead of the pull string out the back of the neck.

Today I am pleased to present another maker’s 18″ creation of which I only know of one other but its whereabouts eludes me. John Turner figures were a staple for the beginner ventriloquist back in the 1940’s and 50’s and I have had many of his creations in the past but never saw a fully functional 18″ figure until I purchased this little fellow. He only has mouth movement but he has Turner’s standard looking face with his marble eyes and even his shoes are made by turner using wood and hard leather. I believe the clothing you see him inn as a cowboy to be original. He is virtually an untouched just as he came from Turner’s shop. I love this little guy.

Now I mentioned I know of one other miniature Turner and it was owned and used by Loring Campbell and I have included a wonderful picture showing Mr Campbell holding his tiny Turner Figure.

Where is this Turner figure now?? 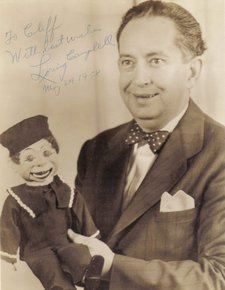 If you would like to see more information about Loring Campbell including his brochures, check out “The Ventriloquism Historical Information Collection, Volume 1.”