The Story of Ventriloquist Bill Podgorny 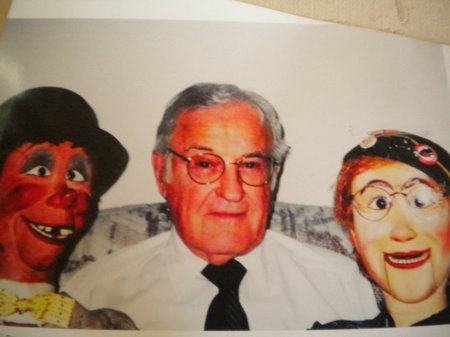 Last week I showed you some great looking ventriloquist figures that were used by ventriloquist Bill Podgorny (click if you missed that blog).

Along with the figures, was the “story” about the figures and how Bill became a ventriloquist. I really enjoyed this story and thought I would share it with everyone.

I was born in l920, and my childhood was spent as a child of the depression.

Back in those days we did not have television, computers, microwaves and all the technology we have today. We did have radios and movies which was our greatest entertainment. We played a lot of sports and made up a lot of the games. Radio was a big part of our entertainment because of programs like Edgar Bergen and Charlie McCarthy, Eddie Cantor, Jack Benny, Fred Allen, George Bums and Gracie Allen, Amos and Andy, besides all the great dramas.

Sunday nights was comical night as there were several one half and one hour shows. Every Sunday we would pop a dish pan full of pop corn to eat while listening to the program. There were comic shows during the week, but mostly dramas, which today we know as soap operas. The Shadow was one of our favorite scare programs for we would drive out into the woods and listen to the car radio with the lights out. Pretty scary even when we would have a girl friend along. (BR. . . before Ruth)

It was at the Capitol Theatre in Rockford that I got my first thought of being a ventriloquist. Every Saturday Night was amateur night between the double movies they showed. This one particular night this man put on a nice skit with his doll, I Joey. I thought that it was neat and wondered if I could learn to do it.

His name was Harold Hines and I don’t remember how I met him, but I did. He was in his upper 20’s or early 30’s. He told me he was a carpenter and also was a wood carver and that he made his own dolls. He invited me to see the other dolls he made and he was making a new one and offered it to me. He wanted $12.50 for the head, hands and body. I hesitated about paying that much as I was only earning about 45¢ an hour at that time. I don’t remember how I managed to pay him, probably a couple of dollars each pay day. I bought the clothes for the doll from a Sears Mail order catalog. I think I ordered for a 5 year old boy. I did all the alterations on the clothes myself [The shoes had been worn by his 4-year-old sister.]

Now that I had the doll and clothes I thought I’d better learn how to use it. Harold Hines gave me some pointers but it just suddenly came to me and I started to do a lot of practicing. When I showed the doll to my Dad for the first time, I tried to say something in Polish. My Dad laughed and he said that the doll looked like “Wotek”, which is the polish name for Albert. I don’t know who Wotek was but the name of Albert stayed with me.

As I got better at this, I then tried making my own skits. I kept every copy of jokes and stories that I heard and tried using them. At first, I only entertained kids and I enjoyed doing that. As I got better at it, I entered a couple amateur shows but never won anything.

A popular entertainment at that time was the Saturday night broadcast of the WLS Barn Dance from Chicago. Seems we never missed one of their broadcasts. Rockford also had a Radio Bam Dance broadcast on WROK on Friday nights. Quite often they would also have guests from WLS on their broadcasts. This was called the “Rock River Bam Dance” program as the radio station was near the river in downtown Rockford.

Some of the cast members from the Rockford barn dance formed a traveling group and would perform during the week at special functions and I joined one of these groups, although I never appeared on the radio broadcasts. We would perform at schools and country locations and one of the popular performances at that time was being sponsored by some politician running for some office. We would perform for about half an hour so, then the politician would make a speech and then we would end the evening performing some more. It was a lot of fun but I was still pretty young and I just didn’t fit in with that group.

After a year or so, Harold Hines contacted me and said he had a couple of dolls for sale. One was a life size one of Popeye. This was before Popeye was in the movies so I had no idea [what] his voice was like. I didn’t want that one as he was almost my height. He also had another doll that looked like Mortimer Snerd. This doll was complete dressed in a suit [hat] and shoes. I was interested in this one and I think I got the complete doll, clothes and all for about $25. I must have paid this off like I did with Albert. As the name of Mortimer was already taken I decided to call this one “Oscar.”

I didn’t do too much with either dolls as I was still trying to get my education in and working also. Then when World War Two started I didn’t do anything and when I entered the Navy, the dolls were just kept in storage. After I got out of the service at the end of the war, I just almost forgot about them.

After Mary and John were [born] I did do a little bit with them but I just lost interest in them. I just kept them in storage.

I should have mentioned earlier that I acquired Albert in 1939, I was only 19 years old at the time. When Ruth and I retired in 1982, I did a little bit with both dolls mostly with the kids. When we moved to Beacon Hill in 2000, and not having room to store them, John consented to take [care] of them until I needed them again.

In 2004, Beacon Hill was celebrating their 20th anniversary and planned to put on a show with talent from the residents and employees of Beacon Hill. Ruth thought I should be in the show, but did not know how to get the dolls up here from John’s house in Georgia. When Ruth passed away on 26 May 2004, we had a memorial service for her and when John and Mary Nell were here for the service, they brought the dolls on the plane.

The Show at Beacon Hill was for four performances and it turned out to be quite a show. Even though Ruth was gone, I performed in her honor as this is what she wanted me to do.

I would like to have done more now that I started again, but I have to write my own scripts, and I just don’t have the talent for that. I have kept copies of jokes and funny stories, and try to prepare a program from that. Sometimes it works out okay.

4 Responses to The Story of Ventriloquist Bill Podgorny