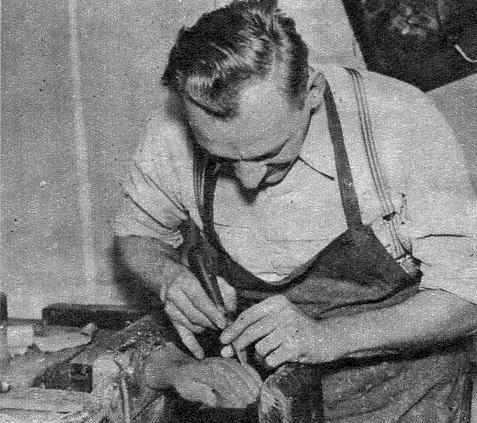 Being a prolific builder of Ventriloquist figures meant that as Frank Marshall grew and changed his characters and became more of his own style as far as his heads were concerned, remember he used the Mack heads at first, he also changed his hands.

He of course started using Mack’s flat hands but in the late 1920’s he changed his style and gave the fingers just the slightest bend (picture number 1).

He then took this same hand and separated the fingers (picture number 2) these two styles of the same hand were used for the most part into the mid 1940’s.

Then came the appearance of the bent fingers hand (picture number 3) which were used right up until the end of his figure making career and are actually the most recognizable style of hand that Marshall created.

Picture number 4 is a variant of the number 3 hand but is about a third the size larger and was used on his special order custom built Frank Byron Jr. replicas that he made. I do have both a Frank Byron Jr replica in my Marshall collection called Theodore Peckerwood. Also the figure named Joe Doaks has the oversized hands.

Hands number 5 and number 6 are again variants of the number 3 standard hand but number 5 has the index finger pointing. This style was used on Charlie McCarthy.

Number 6 has the index finger attached to the thumb to create a circle.

It is fun to see the progression that Marshall used and the variations.

This entry was posted in Frank Marshall Figure (Dummy). Bookmark the permalink.

1 Response to The Hands of Ventriloquist Figure Maker Frank Marshall