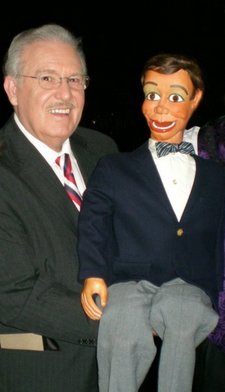 Unknown to me Bob Isaacson knew who had outbid me on the Frank Marshall figure on eBay. Bob also could see beyond the poor paint and messed up mechanics that this figure was a close resemblance to Danny O’Day.

Bob like me knew he had to have this figure. He just had to have it. His ulterior motive will present itself soon.

Bob kept talking with the buyer, who said he was restoring the figure, letting him know that if it was ever for sale Bob would step up and purchase same.

The figure was in fact restored and offered to Bob because the person ran into a financial problem. Just what Bob was hoping for. After some negotiation Bob purchased the figure.

Unfortunately not everyone knows how a Marshall figure is supposed to be painted, so as soon as Bob got the figure home and even though it had just been redone, it again was stripped down and Mr Isaacson repainted the figure doing it like Frank Marshall would have done with his stage orange colors. Bob really knows this technique and is a true master at it. This of course was all taking place without me knowing.

Bob was crafting a surprise yes for me but for the ConVENTion as well.