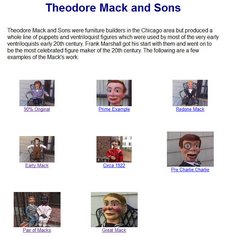 A good question was posed to me the other day and that was how I was able to tell if a Figure was made by Theodore Mack. I will tell you that was a great question and the first thing I was able to say was that because of handling so many of them I know what they look like but on closer thought there are some very definite items that will say Mack.

The first thing is the shape of the head. The head on a Mack figure is much more rounded than other figures. The Mack business was architectural carving and that included faces. They took those faces and changed them into full heads to do the ventriloquist figures. They are much more full and round in shape. 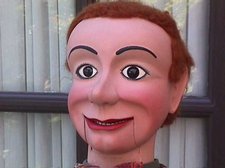 They used a pull string with a ring but in many of the figures they used a lever with a large flat surface. This paddle style lever is a good giveaway to say Mack.

The muslin arms were attached to the shoulder by the use of a 1 1/2″ square piece of wood which had a screw going right through the middle of it , through the muslin and then into the side of the shoulder. Marshall used this in his very earliest figures but later abandoned this style. 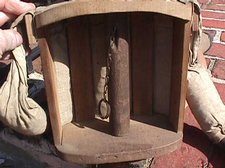 The ears on the Mack figures are rather large and flat saucer shape with rather deep carved detail and a raised edge all the way around. All are done like this. Plus the bridge of the nose is rather flat. 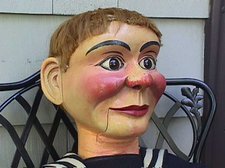 The hands were what are called stylized. They really are very flat and look rather silly. Marshall corrected that later on.

Also for some reason Mack used canvas shoes. They are quite distinct and without question came from the same supplier. Arms and legs were stuffed with either straw or cotton.

To see more, check out the Theodore Mack and Sons figures in the Ventriloquist Central Collection