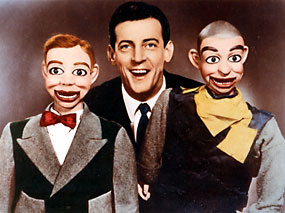 If you watched the Paul Winchell show which we posted on yesterday’s blog you saw that Paul and his helper on the show Milt had a contest with two if the children in the gallery. What I found that is most interesting is the prize give away that Paul made to the children.

The girl won the contest and was awarded a Jerry Mahoney doll as the first place winner. The boy who came in second won a Knucklehead Smiff doll. These were produced in the early 1950’s as this show was from 1954. The dolls were made of composition ( heads and hands ) and unfortunately composition did not stand the test of time. Most often they became cracked and actually layers would peel off.

If both of the children had saved their prizes from 1954 until today 2009 the actual winner ( monetarily ) was not the girl but the boy. You see the Jerry doll was produced in many more numbers than the Knucklehead. The composition Jerry can be found easily but you will look far and wide to find a Knucklehead Smiff. I my self have had many Jerrys in composition but have only had 2 Knuckleheads. As matter of fact I don’t have either in the Ventriloquist Central Collection at present. All of my examples have been traded off for other figures. I guess I will now look to replace them in the collection.