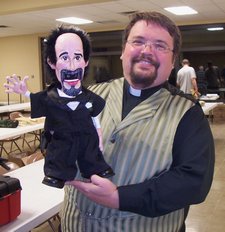 Bob Abdou brought this to our attention about Pastor Scott Bryte. If you don’t know about Scott, he makes ventriloquist figures, carved out of wood.

This came from “Carvin’ Tom’s Woodcarving Blog“. I think you’ll enjoy this.

On Monday night we a special guest at The Chisels and Chips Carving Club.

Scott Bryte, whose hobby is building ventriloquist dummies, wowed a crowd of about 45 people with a discussion of the fundamentals of dummy creation followed by an impromptu ventriloquist performance.

At the outset, Scott admitted to being “just a little nervous”. He had many performances under his belt, but had never presented a “how-to” to such a group of capable artisans. He needn’t have worried. The crowd loved his talk.

Scott describes himself as a “bagpipe-playing, Victrola-collecting, children’s-book-writing, woodcarving ventriloquist, who while currently a Lutheran pastor, hopes to be an artist when he grows up.”

1) his “altar”-ego “Pastor Woody” [Sorry, I just couldn’t resist that one:-)],
2) a 4-foot tall, Frankenstein-inspired creature named “Sparky”,
3) “Herold, the Christmas Angel”
4) several other tiny dummies that Scott calls a “Carv-TOONs”; an Oragatan, a little frizzy haired blonde kid (no name yet)and Mr. Puppet. These clever, albeit very simple dummies sport only movable mouths. However, what they lack in complexity, they more than makes up for in “cute”.

So, was Scott’s presentation well received? You be the judge. Before he left, he had 3 people begging him to run a puppet making class for them. 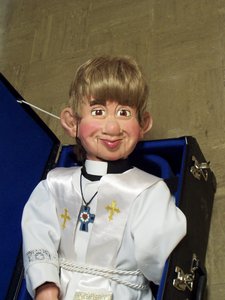 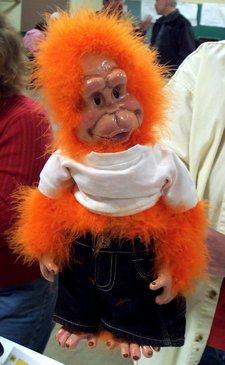 Thanks to Tom for letting us share part of his blog with you.