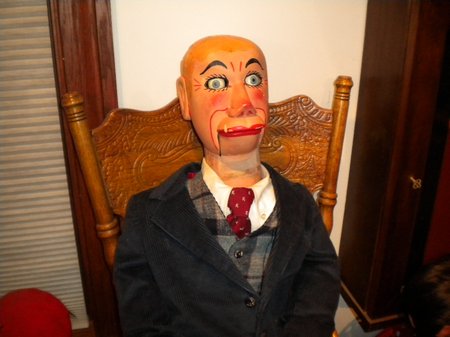 Fred became a ventriloquist in the 1950’s and it was from Len James that he purchased his first pro vent figure head. This was back in 1955. A year later he purchased a second head. Fred did use the first one for a long time but didn’t really use the second.

You can look at Fred’s web site here http://dummyman.ca/ and read his bio page.

We skip to today and Fred has wound down and the heads were stored away and decided he wanted them to reside with the Ventriloquist Central Collection so we made a deal and they are now here.

These are carved from basswood and have side moving self centering eyes, also wooden and slot jaw. The are done with the leather under the jaw. These heads are still in original condition except for the under jaw leather and the loss of hair on the first head.

I pictured the heads on a body just to give the idea as to how they look. I kind of compare the carving as a cross between Ken Spencer and Foy Brown.

I am pleased to now have them in the collection and happy to share Len James’ work with all of you. And, if you happen to have any information on Len James I would love to have it.