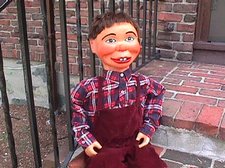 This wonderful fellow has a very good story associated with his acquisition for the Ventriloquist Central Collection. So get a cup of coffee, glass of tea or your favorite beverage, sit back and read this great story.

A few years back eBay mixed live auction gallery sales amongst their regular sales and I happened upon one such live sale that had a very nice walking Marshall figure among the collectibles. I book marked the sale so that I would not forget so that I could bid. On the day of the auction I looked and it said that the figure had 4 hours to go so I went about my business and came back with plenty of time but when I logged on I found out I had missed the sale and the Marshall figure had sold for the tidy sum of $800.00. Yes I had missed a bargain and I was sick. Oh well I missed it but there is always something else.

A few months passed by and I get a call from Bob Isaacson and he tells me this great story about a friend of his that purchased a walking Marshall figure at auction and I told Bob that it was the figure I missed. Bob said the fellow didn’t like the walking body because it was big and cumbersome and so Bob purchased it and wanted to know if I was interested. Of course I said yes (as I do buy Marshall parts) and so the body came to the collection. I told Bob that if this fellow ever wanted to sell the head I would love to purchase it and Bob said that it did not seem likely but if it ever happened he would of course let me know.

A few years passes by and I am with Bob at the Vent Haven Museum during ConVENTion and as we walk through one of the building Bob pointed out a picture of Ray Conlin (his real name was Ralph Connors) on the wall and low and behold Ray is with the walking figure of which I now owned the body. I said to Bob,” Gee I only wish you were able to get that head!” We chuckled and walked on.

Well this past summer at ConVENTion Bob met me on the first day and says to me,” I have a big surprise for you but I am not telling you and you will have to wait until I do my performance to find out what the surprise really is.”

Now you know this made me crazy for the next couple days. I had no clue what was going to take place. So the ConVENTion continues until it is Bob’s turn to perform and because of the surprise I made sure I was right up close. I didn’t want to miss a thing. Bob talked about his career in ventriloquism and finally he decided to bring out his figures.

He said he brought his figure named Junior. This didn’t ring a bell but as soon as Junior was unveiled I started to shake. It was the Ray Conlin head. Oh my God it was the Marshall head that goes to the walking body.

But how? But when? It didn’t matter as now the figure was Junior and Bob was using him and he was simply great!! Talk about surprised I was flabbergasted to say the least.

After Bob’s performance I went back stage to help him pack and he told me that just a month prior to ConVENTion he was able to obtain the head. He told me he had another gig he was going to use him for after the ConVENTion and then he would let me take ownership.

Talk about making my ConVENTion. I was in heaven.

True to his word about a month later Bob contacted me and the head arrived here in the Ventriloquist Central Collection.

Now the funny thing is Bob has preserved the character of Junior forever because his performance was recorded at ConVENTion and I loved the way he looked so even though I have his original body, I also have an original standard Marshall body that he is married to as well. I wanted to keep him as the Junior Character that Bob created. So you are getting pictures of him both ways first with the regular body and then with his walking body.

This Marshall head is one of very few that was done with buck style teeth and he has mouth movement only. He has semi ball and socket neck and leather under the chin. I date him from the late 1930’s and absolutely love his look. The paint is in wonderful condition and appears to be original.

Thanks Bob for making this stupendous figure a part of the Ventriloquist Central Collection.