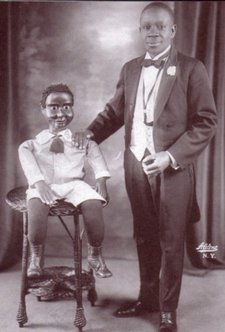 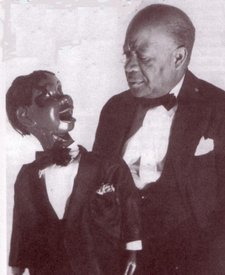 Recently I was sent in a request for some information on the famous early black ventriloquist John Cooper. I had to do some reading but did in fact find this great report on John’s complete Barber Shop routine so here it is for all of you to read and enjoy.

Man I give these early ventriloquists a lot of credit for what they did to make themselves stand out. Just think about the set up for this routine. 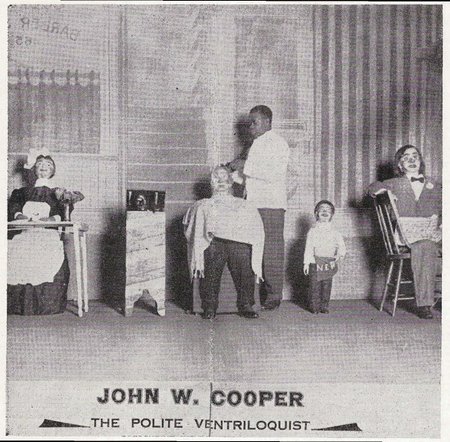 Fun In A Barber Shop
By W. S. Berger

How would you like to get a 15-cent haircut and a 10-cent shave? Oh, yes, you would have to add a 5-cent tip. These were the prices in the tonsorial shops in 1909, when the veteran ventriloquist, John W. Cooper, originated his colored barbershop for white folks.

The opening of the shop was on the vaudeville stage, with Cooper as the barber and five characters in the organization. The photograph is 43 years old. In the barber chair is Mr. Haskins, a regular customer. Miss Auto, manicurist, is seated waiting for Mr. Haskins to leave the barber chair. Mr. Jenkins, another regular customer, is seated waiting to be called “Next!” Sam, bootblack, is in the towel box, his head sticking out. Jimmy, the newsboy, is vending his wares.

The figures were operated by fish lines attached to foot pedals and concealed by the bottom of the barber chair. Cooper had many headaches with this production before getting it to function perfectly. The mulatto manicurist was produced by the famous Le Mare & Son, Manchester, England, and cost $35.00. The other figures were produced by Thomas W. Yost, Philadelphia.

The script for the skit is very humorous. Each character had plenty of laugh lines. Mr. Cooper had contrasting voices assigned to each figure-plus his natural voice. Before being placed in the towel box to quiet him, Sam imitated the picking of he banjo, and the newsboy accompanied him in a ragtime song. When Sam was placed in the box, it was all distant-voice business, and Cooper is still very good at that phase of Vent.

The barber shop closed is doors with the closing of vaudeville, but Cooper at the age of 79 is still performing with one figure. Mr. Cooper started with Vent as a hobby in 1895, after having been intrigued by the performances of Harry Bryant and Al O. Duncan. He gave his first professional show in 1897, when only 21, employing four figures and being presented as “Prince Madagascar.”

In 1901 he had a long engagement with Pringle’s Georgia Minstrels. In 1903 he was known as
“The Black Napoleon of Ventriloquism,” using two walking figures, one an old man who walked with a crutch, plus two small boys, one Negro and one white. All of these figures were made by W. H. J. Shaw. About this time Cooper was one of the first to introduce a talking parrot, which was made by Louis Grannatt, Brooklyn.

About 1919 Cooper started using one figure, after seeing Arthur Prince do his show. He covered all the vaudeville circuits from coast to coast and in Canada. He appeared on the bill with such famous vaudevillians of the day as Madam Patti, Flora Batsen and Henry Strange. In addition to his ventriloquial talent, he is an accomplished musician and fancy-paper tearer. He joined the IBV early, holding card No. 35, and was made a Life Member in 1952. He is still doing club dates and private parties with his colored boy, Sam, made by the famous Theodore Mack, predecessor to Frank Marshall. The figure is still in fine shape after a repaint job by the Great Lester. Cooper is living in a cozy home at 762 Halsey Street, Brooklyn, with his wife. He has a daughter and grandson.