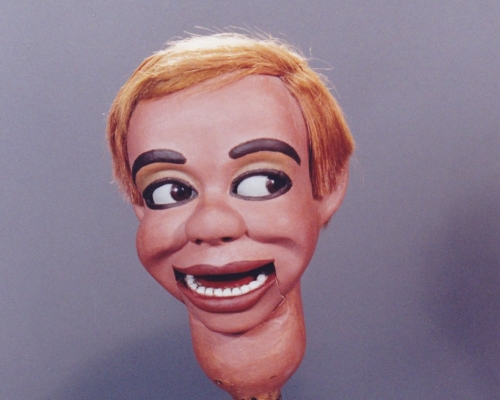 A few weeks ago I did a blog about the great manipulation and controls of the Jerry Mahoney figure by master ventriloquist Paul Winchell. I had my own thoughts on how he accomplished his manipulation but I was not quite correct (click here to see the blog).

My good friend Jerry Layne has supplied the correct information on both the manipulation and the controls for Paul Winchell’s “Jerry.” He was even so kind as to include for us pictures of Mr Winchell’s head stick showing the placement of the controls. Man, Paul was genious.

Hope you get these pictures. I think this is the secret to how Winchell worked or gave the impression of the eyes moving, while controling the winkers.

He held the stick with three fingers. He worked the mouth with his index finger (in the front of he stick). The eyes (left to right) AND closing eyes (both on the left side of the stick) with his thumb. In these pictures (my hand), the thumb is near or on the eye control. Just above the eye control is a small brass box, with a brass lever extended. This is the closing lids control (both lids together). In the center of the box was a slight nitch, under which the lever could easily be locked into position, holding the eyelids at a half closed position. Then he could go back to the eye control, and still move them left and right, while the lids were half closed. Giving the impression that the eyes were moving, while the lids were in motion. If the lids were closed completely, he didn’t need to use the eye control. Once he released the winker control from the nitch, they opened all the way. Of course, Winch was a brilliant manipulator, kept “Jerry” moving, and alive. So, the illusion was both eyes and lids were moving at the same time. 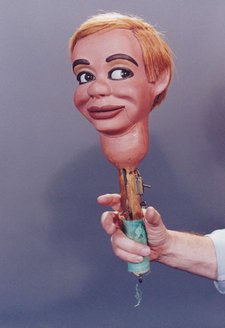 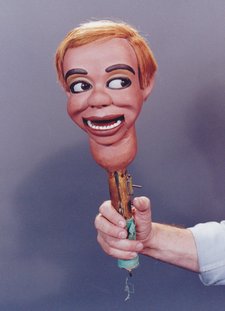 Hope this gives you the answer you were looking for.