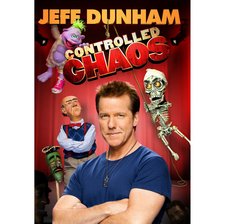 I had a few people email me directly asking my thoughts on Jeff Dunham’s show so rather than answering individual emails or responding to the vent lists I decided to do up a blog entry of my own.

First thing I must say is that Jeff is the consummate professional performer and in my eyes presents himself as such right down to his stage settings. I loved his use of the big screens showing the pertinent pictures to what ever he was talking about at the time.

Everything else on stage had its place and was set up for his ease of use and everything looked great. On one of the lists there was a discussion about a teleprompter being used, but that was mistaken. I could see exactly what it was, a sound monitor. Most today use these so that they can hear what the audience hears.

To me Walter is just a scream. I love him and I think Jeff will never find a character to ever top Walter. That of course is my opinion. Achmed, although a very funny character, is not my favorite. I thought his time on stage was just too long especially because Jeff introduced Achmed’s son. This character for me just missed the mark. I think he could have shortened the show to an hour and eliminated him. But Jeff had to try him on a live audience and from the reactions they seemed to love it. Of course we have no idea how many takes were done to get the right audience reaction.

The last segment was of course Peanut, who is as zany as ever. I loved his use of the dummy’s dummy and also Jeff’s use of 3 other voices including his own for 4 voices, was simply sublime. Some of the best ventriloquism I have ever seen. I think Jeff should expand on that and do away with Achmed;s son. Again this is my opinion.

All in all I loved the show, I have ordered the DVD and think anyone who loves ventriloquism should be thanking Jeff for making ventriloquism something that we all can see on TV ( Comedy Central) almost any day of the week. It seems you can always find one of Jeff’s shows being run.

Kudos to you Jeff Dunham for doing everything you do!!