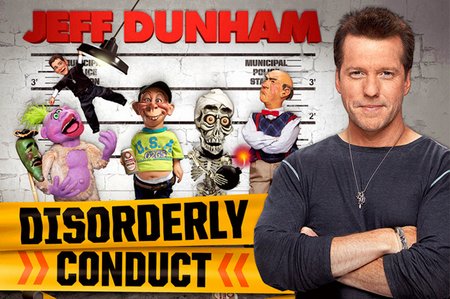 On Jan 12th 2013 I had the pleasure of seeing the great comedian / ventriloquist Jeff Dunham perform at Boston University’s Agganis Arena. I have seen Jeff perform a few times in the old days at comedy clubs but this was the first time in his huge arena setting. I must say he really has it down to a science.

He has two 18 wheelers with equipment and a full road crew to set up for his new show and they are truly professional in every sense. The stage set, lighting and sound were perfect for the entire venue and no one was left not being able to see or hear. On center stage is a giant 40 foot round screen surrounded by great lighting and during the show Jeff uses this screen show show photographic stills and then his routines are on it so if you are in the back row you miss nothing.

Achmed opens the new show followed by Bubba J then Peanut and Walter was last. Jeff’s new show is a combination of some routines of the past mixed in with new scripting you have not heard and I can tell you it was simply fantastic. I was on the floor laughing most of the show. I actually hurt from laughing. Jeff actually lost his place during his routine with Bubba J and ended up doing about 20 minutes of ad lib which was so funny he was yelling to the stage hands to write the jokes down. No kidding it was that funny.

Jeff introduced his toy ventriloquist figure “Little Jeff” on stage. He actually unpacked it and then placed him on his knee as in old school and rocked the house with some more of the funniest stuff I have ever heard. Just showed that it makes no difference what you are using as a figure, it is the performer that makes the act. One word for his routine with Litte Jeff FANTASTIC.

So to sum up, if you want to laugh until it hurts Go see Jeff Dunham.