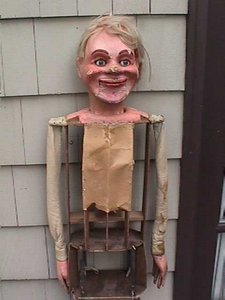 We recently did a mystery ventriloquist and figure and then revealed the vent and the figure’s name as Jack Breezy & Ginger.

Today I would like to share with you everything else associated with the two of them. You see I was very fortunate to acquire for the Ventriloquist Central Collection Jack Breezy’s entire act in his original case. Inside the case, which had not been opened for the better part of 60 years was his original sailor suit, Ginger’s sailor suit, Jacks 2 different boxes with makeup, his original hand scored music, his notebooks with all his hand written dialogues as well as some finely typewritten dialogues too. His original glass beer mug was there as well as three woodblock acid etched negatives for his pictures. The picture we used came from one of these blocks. His make up mirror was even there.

The figure, Ginger, was made by Herbert Brighton and is a walking figure. He is totally original and has not been touched by anyone since being packed away over a half century ago. The head has one was side self centering eyes, one eye winks, upper lip moves as well as lower lip and he also has a spitter. The original bulb for the spitter was in the case. I also found the original type written instructions for the walking body but believe me with all the rub Goldberg parts it still works just by swinging the legs as all the other walkers.

This really is a great way to find figures , with everything that once was used but it may be hard to do it again.