Gary Willner to Perform at the Ventriloquist Central Birthday Bash 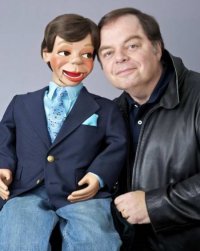 We are so happy and pleased that ventriloquist, entertainer extraordinaire, Gary Willner is going to perform at the Ventriloquist Central Birthday Bash.

Gary Willner was born in New York City. As a child Gary was fascinated with ventriloquism. He taught himself how to throw his voice and practiced the art all through his childhood and early teens. Gary became interested in music when the Beatles came to America. He had his own garage band, singing and playing his guitar to the pop songs he heard on the radio and TV.

It was at that time that someone gave Gary an Ella Fitzgerald album and Gary was hooked forever on jazz and standards. A few years later Gary auditioned for the Sammy Kaye Band, and much to his parents disappointment he got the job.

Gary toured with the Sammy Kaye band all through the early and mid 70’s playing theaters and dance halls throughout the United States. A musician had told him that Murray McCekern, the leader of the Tommy Dorsey Orchestra, was looking for a male vocalist to sing the Frank Sinatra/Tommy Dorsey songbook. He auditioned and got the job, again much to his parents disappointment. It was at that time that Gary Willner performed for President Jimmy Carter in 1976 at the Inaugural Ball in Washington DC.

Gary Willner has performed as a singer and ventriloquist all over the world and has appeared on national television many times. Famous impresario John Hammond once said of Gary’s voice, “Gary has one of the best sets of pipes I’ve ever heard!” In the 1970s Gary and his brother had a writer’s contract with Chappell Music Publishing Company, writing songs for other artists. Gary continues to sing and write songs and his album “Is it Sinatra?” is available now. Gary is in the process of recording an album of all original songs and will be available soon!

Gary has opened as a ventriloquist for stars such as Don Rickles, Robert Klein, Joel Grey, Debbie Reynolds, and Alan King, to mention a few. Gary has appeared on many national television shows such as The Tonight Show, The Statler Brothers Show, The Charles Grodin Show, Into the Night Starring Rick Dees, Robert Klein Time. Gary is presently working in comedy clubs and doing personal appearances.

Be sure to check out the Ventriloquist Central Birthday Bash webpage where we have a great video of Gary performing.

Don’t forget, the “Early Bird Special” will end on February 19th, so be sure register now.