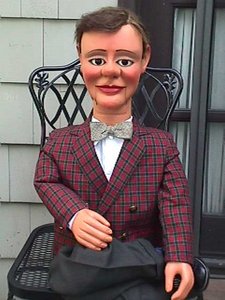 This figure, Bernie Birchwood, was happy to pose in the Uncle Sam outfit for the July 4th celebration and after that I have had a few emails asking me about him.

He is a most unusual figure and was created late in Frank Marshall’s career although he has one thing that is a throw back to his earlier creations. He has the leather under his chin but it does not attach as the leather did back in the 30’s and forties. It is shaped and allows the mouth to really open wide yet you do not see the hole under the chin.

The ears on this Marshall are also extremely detailed and his nostrils are also carved out very deep. I do not have another Marshall with nostrils like this.

The ball and socket neck is rather large but the head is also a bit bigger than normal but the total height of the figure is the standard 40″ tall. The head is secured with the normal screws though the top sides of the head and also the lower back of the neck. The center lower screw secures the head stick.

His wig is original and is a bit thin and as you can see it has a perfect part just like the hair style of the time. The card inside his head is from the Loomis Blvd address so I would date this fellow from the late 1950’s to early 1960.

His lever and head stick are original but the lever is not the common chop stick but rather a dowel . I have seen this before on Marshall’s work. He only has mouth movement but Bernie has a great look and in the right hands I am sure would crack people up. I only wish Johnny Main was still alive so that he could have used Bernie a bit. It would have been great.

I hope you enjoy seeing Bernie up close and personal.