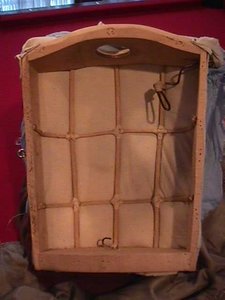 Frank made bodies using the standards he learned from the Macks but over the years he developed his own style which in my opinion actually gave the figure the best shape. I talked many times about the shaped shoulder boards and his carved out neck hole for the ball and socket but his covering of the body I don’t think I have mentioned.

Early style bodies had slats in front and then a sheet of muslin was tacked over the shape of the body. This did give a nice closure and because the slats were around an inch wide and spaced in the front middle, two more on either side and then the side frame of the body.

As Frank progressed he eliminated the flat slat boards and instead used spline which he first soaked in water to soften then he could shape them and attach them to the body in both vertical and horizontal directions. Sometimes he would even tie the spots where the spline crossed each other with twine.

Once the bodies had taken their shape Frank covered them in a cloth that had a cotton interior much like the moving pads that movers use today to protect furniture. This gave a nice covering to the body and he would attach this with staples. He used staples and furniture tacks both in his construction.