Posted on September 7, 2011 by Webmaster 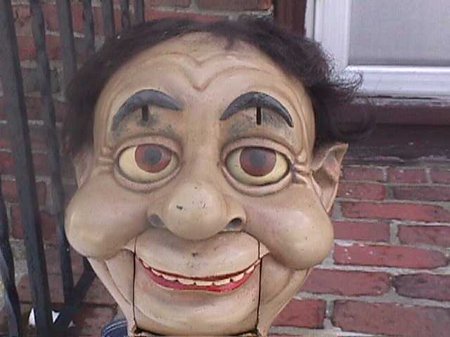 I was just thinking about the wonderful mechanics that the McElroy brothers put in their figures and started to ponder the evolution of the raising eyebrows in their figures.

When they created their first figures, commonly called the Troll, the eyebrows moved on their own by weight control. In other words just by the movement of the head the eyebrows would move. You can check out the troll figure here.

Bob Neller was using his Marshall figure named Dizzy Dugan and this figure had moving eyes, and raising eyebrows as created by Frank Marshall. He took this figure to the McElroy brothers and had them convert Dizzy to they controls mounted with the McElroy box but on this figure they put the control for the eyebrows on the front lower part of the head stick so that Bob could control the movement. You can check out Dizzy here.

At the same time that they did this conversion they were still doing the floating eyebrows now in the Johnny Figures. Check out Happy Hazzard here.

Along came Rudy Valley and he was friendly with Bob Neller and I am certain that when he saw the control for the eyebrows on Dizzy Dugan he asked the brothers to do the same for Linoleum, Sally Ann and Ezry. After those figures were done for Rudy Valley Bob Neller then had the brothers make Reggie Trickpuss and again no more floating eyebrows.

1 Response to Evolution of Raising Eyebrows in McElroy Ventriloquist Figures