I was just thinking about Charlie McCarthy and how wonderful a figure Charlie was. That wise cracking boy and how he almost didn’t make it as Mr Bergen’s main character.

Edgar Bergen saw the mascot of the New York Publication called Esquire Magazine and their caricature for the magazine was this moustached fellow in top hat and tails that they called Esky. Mr Bergen thought how sophisticated that figure would be as a wooden partner.

Mr Bergen contacted Esquire magazine and told them of his idea to use Esky as his partner in the many night clubs and they responded favorably to his request and said he could in fact use their character. They did ask that Bergen sign a contract that for the use of the character Esky he must pay an annual fee for the use of the name and character.

Mr Bergen thought this would not be advantageous for him so he decided to ad a monacle, top hat and tasi;ls to his own figure Charles McCarthy and went on with this venture without Esky. I dare say he had no problem.

An Esky figure was created and carved in plastic wood with body done by the McElroy brothers and it is residing in the Vent Haven Museum. Unfortunately it is not seen in their panorama virtual tours as it sits in the back room of the first virtual tour.

So that you could see this wonderful Esky figure I happen to have the October 1989 issue of Collector’s Showcase Magazine and this wonderful figure was used on the cover along with Jacko. 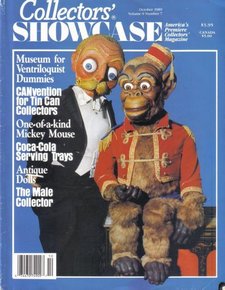