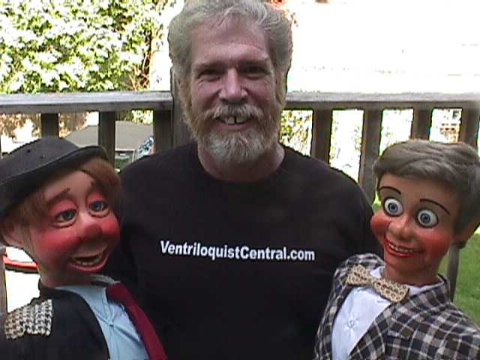 Dan Willinger was born in 1949 in Brookline Ma. and at a very young age was stricken with antique bug. He would go out on trash days with his little red wagon and find great objects that he would bring home much to his mother’s dismay. On one particular summer day Dan found a rather large lot of old books that were being disposed of by one neighbor and of course he grabbed them up and carted them home in his red wagon.

Upon arrival home his mother scolded him about the musty and smelly condition of the books and made him go to get rid of them. He was gone around an hour and returned home with a K&S Danny Talk ( Dummy Dan ) Ventriloquist figure that was the same size as him. His mother again asked where this wonderful doll came from. Dan told his mom that he had traded the old books with a kid down the street. His mom took him and the doll by the hand and brought him to the kids home and made him give it back. Through the years Dan continued to buy and sell antiques and concentrated on antique clocks as a specialty. He traveled the country from the late 1970’s through the mid 1990’s buying and selling clocks. With the advent of the internet Dan continued doing clock business as dwclocks.Dan one day reminded himself of the ventriloquist figure he had traded for as a 5 year old and typed into the computer search engine CHARLIE MCCARTHY FIGURE. Well the world opened up and he found the doll he had originally traded for. That is a K&S Figure Danny Talk ( Dummy Dan ). Dan continued to buy and sell ventriloquist figures upgrading as he went along. He found that his love for the ventriloquist figures far outweighed any other item he had ever bought or sold and became a true passion.

He just could not find enough figures. He concentrated on Frank Marshall figures but all antique figures are his love. There are some modern makers that Dan feels belong in his collection such as Ray Guyll , Bill Nelson , Brandt Gilmer , Conrad Hartz. These makers still do figures in the traditional manner and therefore Dan loves their work.

Dan thought that finding a McElroy figure would never happen but in his quest for the holy grail of vent figures, he has acquired a Marshall/ McElroy and also Cy Leonard’s “Happy” McElroy figure.

Dan’s wife and best friend is Helen who for the past 30 years has been right by his side in all his adventures in buying , selling and collecting. She has said she can’t believe her grown husband is playing with dolls but understands his passion and encourages him in his quest and has even shared in the expense of purchasing some of his great figures. Many times she has come home with great outfits for the figures.

Helen has only made one request and that is that the figures must remain in their room and not invade the rest of the house. Dan has complied and all the figures are out and on display in his pool room. Dan’s collection of ventriloquist figures now numbers over 70 figures of which there are 29 Marshalls. He is still looking for more and his passion has never waned. He is a true collector / dealer and is always looking for that next figure which will turn his head.