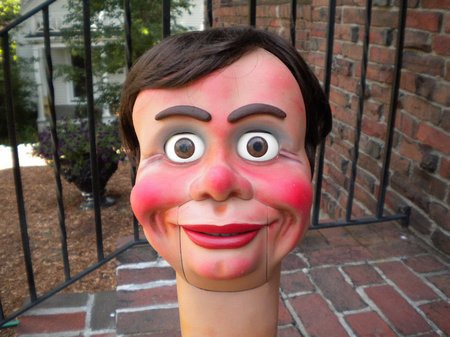 Not too long ago we did a telephone talk with Bill Nelson and Dan Lavender. At that time it was mentioned that a figure was being created for the Ventriloquist Central Collection by Dan Lavender. I am happy to say that figure has arrived and I could not be more impressed.

I would like to let you know how this figure and came about for the collection. I was talking to Dan Lavender a couple years ago and mentioned to him that I really wanted have one of his figures in the collection.

He was amenable to that and that I have a casting of Cecil Wigglenose II and how would you like to use that casting and make a figure from it. He thought that was a good idea so I packed up the Cecil Wigglenose II casting and I sent it to Dan. I did not give a time frame for building this and said do it in whatever spare time you have and when it’s done it’s done.

I also told him that this is no longer a McElroy but it’s a Dan Lavender figure so therefore I did not need him to do the cradle or the typewriter style keys and he could created in his own style that he uses on the wooden head sticks that he builds.

This figure is a loaded figure and it has all around moving eyes with eyelids that will follow and also blinks its eyelids, it has raising and lowering eyebrows, side to side self centering eyes, it has wiggling ears, it has upper lip sneer, lower jaw and stick out tongue so it really is a fully loaded figure and I have to give my compliments to Dan because his mechanics are very very smooth and work flawlessly.

I have to tell you I am really impressed with his paint job as well. I know he is partnered with Bill Nelson on building figures and I think Bill has rubbed off on him because his paint work is really really fine.