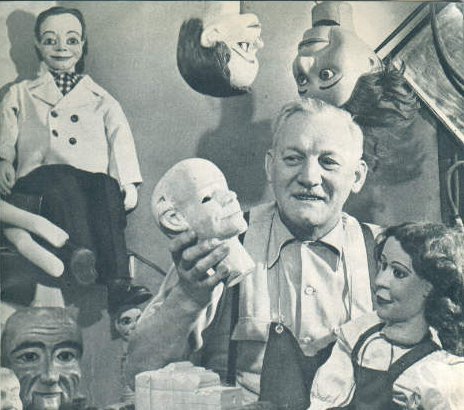 Frank Marshall in his shop

I am asked over and over why do I like the Frank Marshall figure so much. The answer is a rather complicated one, but I think anyone that has ever had a Marshall figure will agree with what I have to say .

For me Frank was able to capture a soul in every one of his creations even though his creations were never really true life look faces. They were all done in a caricature style. His carving always gave you the impression that the figure could give you an answer without anyone’s hand inside his back.

The paint scheme that Marshall was able to finally use the last 20 years of his figure making has been copied by so many because he found out how to make his creations sparkle on stage. I know there are those that think his orange paint is over the top but when you put those stage lights on them they are the best. Even the performer has to put on make up to appear correct on stage so why not the figure. Pastel shading with true flesh tones are great if you are looking at a figure in sunlight but what happens when that paint job is on stage with stage lights? It is washed out and looks like a ghost. Marshall new this and compensated for that.

Today Bill Nelson does painting on figures in the manner that Frank Marshall did, meaning stage paint, and his figures to many look over the top but on stage they are terrific.

Frank’s shaped shoulder boards on his body worked perfectly to give his figures the correct shape and he used a reeding for the horizontal and vertical shaping which gave a great interior roominess for the performers hand. It has been rumored that Frank used fruit crates to make his bodies but I have yet to find evidence of this and I have almost 40 Marshall figures. All his bodies are superbly crafted and many of them are signed  as well.

Mr. Marshall took great care in wigging his figures as well. His wigs for the most part were done with a distinct sewn part and came in both straight and wavy hair style. All were cut to perfection and ranged in colors from black to Irish red. I wish I knew where he got his wigs or if they are even available like they were back then. They were really terrific. Marshall on some of his early figures used crepe hair as well.

Please think about some of these ideas and let me know your thoughts. These are my opinions and they are the reasons that I love Frank’s work!!

This entry was posted in Frank Marshall Figure (Dummy). Bookmark the permalink.