Posted on September 4, 2013 by Webmaster 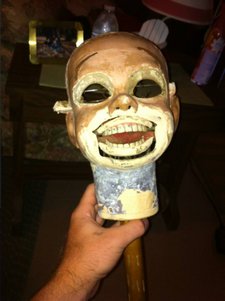 Back on August 24th, I told you about the “Len Insull Figure Projects” where I was able to make a deal on a couple of 7 movement heads with eyes and hands and legs for these heads. They were in need of much work.

I also mentioned that a great guy and and up and coming ventriloquist figure builder in his own right, Austin Phillips, has been actively seeking an Insull figure but just had not found one.

I contacted him and he came down to the Ventriloquist Central Collection, he has been here before, and he shared the purchase with me and received one of the projects.

Well Austin started in on the project and here’s the information he sent us, plus the pictures of the finished head:

Hey Dan and Steve! I’m all done with the Insull head! Here are some pics of the finished product and some during the process.

I rebuilt pretty much the entire head. Most of the mechanics were included with the head, however some were missing and others in really rough shape. I remade both winker mechs, put in hand made eyes, rebuilt the eye mech, new springs, replaced mouth and ear rods, re soldered a couple connections, re made control stick levers in the insull style. My approach to this project was to re-create an original looking Insull figure. Something that performed up to today’s standards, but looked as it would have ordered new from Davenports Magic Co. 50 years ago.

After the mechanics were done, I filled and smoothed out the ENTIRE head, added all new leather, mouth, sneer, both eyes and ears. Painted him in the same manor that Len Insull would have. I even choose to apply old school crepe hair. All in all, I am more than pleased to how this guy came out. Since I was a kid, I wanted an Insull figure. About 16 years later, that dream has now come true! I had to make a torso for this guy, however his hands and legs are all original. Big thanks to those of you who helped me out along the way with this. Now that he is done, you can see him sometime down the road performing with me in one of my magic shows!

I’m sure you’ll all agree with me when I say…….“Great job Austin!”