This article was written by W. S. Berger for The Oracle and was so interesting I had to share. Aaron “Pop” Steinman carved all the figures and then hooked them up some how so that he could operate them from foot pedals.

Very ingenious and just shows the lengths that some will go to be both creative and unique. 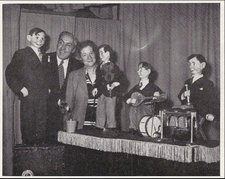 That’s what Brother Aaron “Pop” Steinman, 3851 West King Edward Avenue, Vancouver, B. C., is singing these days. He is the creator of “Alexander” and the, musical trio pictured above. A ventriloquist of over thirty years’ standing, he operates all four figures, which he carved himself.
He supplies voices for the whole gang, and he and his wife manipulate most of the actions by means of hidden foot controls.

“Alexander” is a mechanical marvel. He can put his hat on his head at any desired angle and then take it off; he stands or sits without being supported; he can write; he can hold a telephone receiver and ‘talk” (while “Pop” does the vent voice for the telephone “bit”) ; he can play a mandolin as well as lead the band; he can hold a bottle in his left hand while removing the cork with his right, and then pour out a drink; he can stand on his head or do the “splits,” as well as stand on one leg; he can put a cigar in his mouth, remove it, flick the ashes and then put the cigar back in his mouth ; he can take a handkerchief from his pocket and wipe his nose ; he salutes soldiers ; and, finally, he can heave things at hecklers!

The figures in the band not only “play” their instruments, the music being supplied by record, but they stand up and “sing” (with the vocals supplied by the ventriloquist). They are 30 inches tall, while “Alexander” stands 42 inches in height. They perform on a stage 32 inches high, 24 inches wide and 5 feet long. “Pop” manipulates “Alexander” with his right hand and “Charles Henry” with his left, while the remaining two are controlled with foot push buttons. The detailed process is a “trade secret.” Not satisfied with this achievement, “Pop” is now working on another “boy” who will be able to do things the other ones can’t do.

Brother Steinman became a member of IBV after seeing Brother Clifford Guest, the great Australian vent, in a performance in Vancouver, and talking to him after the show. This method of getting new members is recommended to all our brothers. “Pop” Steinman, we are indeed proud to have an inventor like you and a go-getter like Clifford Guest in our fraternity.

I just wanted to let everyone know that Lee is doing very good and if all goes well, he’ll be going home soon. I’ll keep you updated.