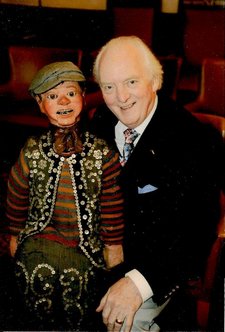 This figure’s name was “Coster Joe” and was a cheeky boy figure. Fred Russell was a huge success and from this he became known at the father of modern ventriloquism.

We received this email and photo from “across the pond” from John Styles:

I thought that you might be interested to see this picture of ‘Coster Joe’, (and myself). Who is safely in the possession of ‘The Grand Order of Water Rats’ (http://www.gowr.net/) here in England.
Best wishes,
John Styles MBE (www.johnstylesentertainer.co.uk )

John, thanks so much for sharing this bit of ventriloquial history with us.

Here are a couple of blogs we’ve done in the past about Fred Russell and “Coster Joe”: